How to bring the EU Green Deal to local levels – with the combined power of Local Action Groups & Communities?

Registration is closed for this event
Are you a part of a community-led initiative? A civil society organisation interested in bringing the EU Green Deal to local levels? Do you belong to a local action group? Are you a policy stakeholder interested in transforming local and regional development policies? Or simply wondering how we can reach the EU Green Deal goals locally? Then this event could be interesting for you: 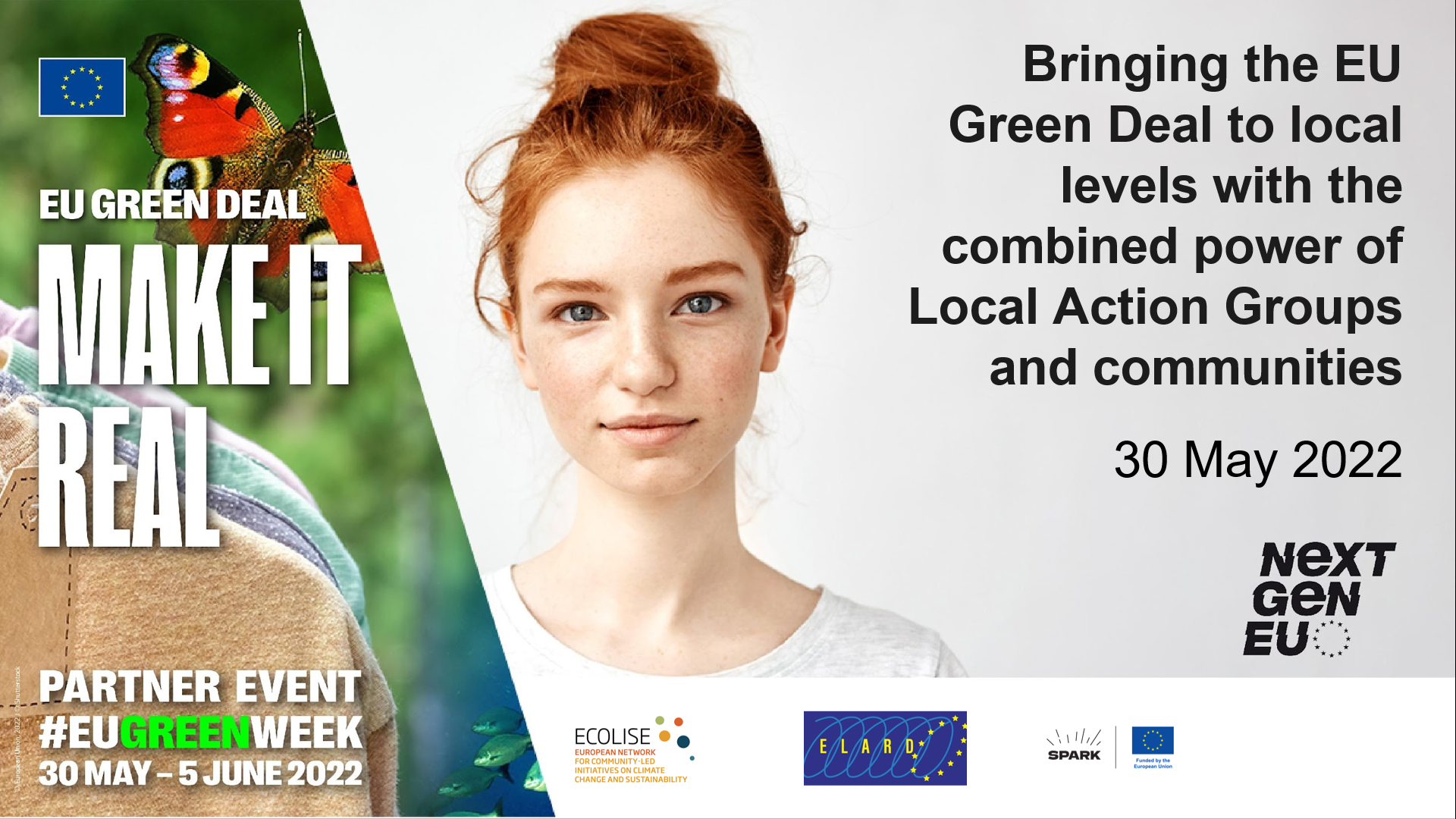 To make the European Green Deal (EGD) a reality locally, we need the broad involvement of citizens and communities. The EU Commission recognizes this with its EU Climate Pact, an initiative which aims to reach out to citizens and help make the EGD a reality on the ground.

Community-led initiatives such as ecovillages, transition and permaculture networks already offer transformative and constructive solutions for a good life within planetary boundaries. To have a wider impact, they need funding and support structures. They also need to engage in participatory democracy, and cooperate with local authorities. This is where a proven EU method for bringing EU Policies to local levels, LEADER, together with its complementary method of community-led local development (CLLD), could be a game changer. New EU concepts such as Smart Villages which pushes for social innovation as a driver at local and village levels could also be of relevance when it comes to developing new transformational local and regional development policies.

The 3,000+ European Local Action Groups (LAGs) who are part of the EU method LEADER are currently preparing their local strategic plans, and are looking for ways to put the goals of the EU Green Deal centre-stage – with the help of an estimated budget for local-level initiatives of €10 billion for the next seven years. Community-led initiatives can give the LAGs the inspiration needed.

This Communities for Future (CfF) session will allow Local Action Groups (LAGs) and community-led initiatives to learn about EU policies and the Community-led local development (CLLD) method, and to be inspired by good examples of collaborations happening already on the ground, with a focus on the EU Green Week topics of biodiversity, but also energy as relevant parts of the EU Green Deal. An interactive space will allow direct networking and take the first steps in finding out what is needed for a strong cooperation and for scaling up constructive sustainable community-led initiatives.

We will also present a new initiative for a Community of Practice (CoP) – a space for mutual learning and exchange on how to strengthen fruitful cooperations between local authorities, Local Action Groups and community-led initiatives. This Community of Practice is driven by ECOLISE (the European network for community-led initiatives on climate change and sustainability) together with ELARD (The European LEADER Association for rural development with a network of over 2,000 European LAGs), in partnership with others.

The event is organised by ECOLISE in partnership with ELARD, with the support of the EU Climate Pact and the ClimACT project.

Eamon O’Hara, co-founder of ECOLISE (the European network for community-led initiatives on climate change and sustainability)

Hartmut Berndt, vice-president of ELARD, LEADER-manager of the LAG Göttinger Land, head of the department for sustainable regional development in the district of Göttingen, chairman of the German LEADER Association

Please help us and let your friends, colleagues and followers know about our page: How to bring the EU Green Deal to local levels - with the combined power of Local Action Groups & Communities?