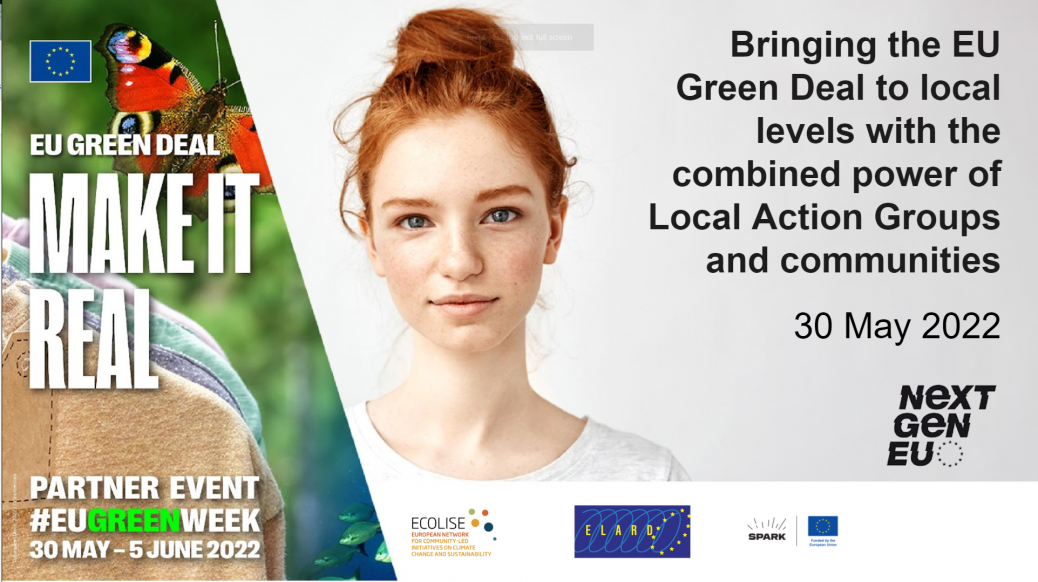 As part of EU Green Week, ECOLISE and ELARD hosted an event on 30 May 2022 centered around the question: how can we make the European Green Deal happen locally?

Guest speakers from the EU Commission and representatives of local action groups and bottom-up initiatives discussed community-led local development and provided good practice examples of cooperation between community-led initiatives and policy stakeholders across Europe. The event was moderated by Nina Klein, Policy Lead at ECOLISE.

Speakers: in order of appearance:

Laurence Graff, Adviser for the EU Climate Pact, commented on the increased need for energy sovereignty, and thus a renewable energy transition. She stressed that the Green Deal is a massive project requiring wide participation, “We need everyone on board, policymakers at all levels – national and subnational – and we also need citizens to support the transition… We need to be sure that there is nobody left behind”.

Graff acknowledged that action by citizens will not be enough; systemic changes are needed too, but said that more than ever it is clear that local action can send extremely powerful signals to businesses and policy makers, “Local action means for me strong climate or environmental advocacy.”

Through Climate Pact Ambassadors, citizens dialogues and supporting climate action, the European Climate Pact is contributing towards the goal to be the first climate-neutral continent in the world by 2050.

“I’m deeply convinced that the people know best about their needs”, said Hartmut Berndt, Vice-president of ELARD and Chairman of the German LEADER Association. Berndt explained that,   through LEADER, the EU supports the implementation of people’s ideas with the formation of local action groups (LAGs).

There are around 3,000 LAGs covering about 61% of the rural population in the EU (you can find your local group in the LAG Database). Community-led local development (CLLD) is a tool for involving citizens at local level in developing responses to the social, environmental and economic challenges we face today.

Berndt stressed that new legal and political frameworks are crucial requirements for supporting local engagement but that the local level is only one level – fundamental political decisions are needed across all levels.

ECOLISE’s Eamon O’Hara commented on the climate anxiety that people are experiencing and of the importance of sharing ideas and inspiration more widely, such as through Communities for Future.

Four projects were presented, showing how community-led local development happens in practice. Davie Philip from Cultivate introduced the Communities 4 Climate Action project in Ireland that helps communities to become climate-ready through training and capacity building, as well as the Community Climate Coaches project.

Nara Petrovic, co-founder of the Sunny Hill community, Slovenia spoke about the journey from disengaged rural residents to their engagement with local action groups in Istria and how lean administration and social innovation is needed to overcome the bureaucratic barriers to participation.

Carlos Alberto Ortiz Sánchez -Tinajero, Mayor of Pedro Muñoz and coordinator of the Biosphere Reserve “La Mancha Húmeda” in Spain, talked about the importance of communications tools and liaising with local action groups to communicate the benefits of the reserve to the local community.

Finally, Hartmut Berndt introduced the Bioenergy Village Jühnde  – the 1st bioenergy village in Jühnde, Germany. He said that the people are the most important factor – people having the enthusiasm, emotion and agency to do something to tackle climate change.

Join the Community of Practice on Community-Led Local Development

With almost 90 attendees, this event demonstrated the huge interest in, and need for, greater collaboration between citizen groups and policy stakeholders to make the EU Green Deal a reality on the ground. To continue to foster collaboration, a Community of Practice on Community-Led Local Development has been recently established. You can find out more and join the community here.

If your community has an example of a climate action initiative and you would like to contribute to informing policy and good practice, you are invited to complete this Local Climate Action Mapping Survey by the end of June 2022. The information collected will contribute to a policy paper co-created by ECOLISE and the European Rural Parliament co-initiating bodies: ELARD, PREPARE, and ERCA, and a separate good practice guide of Community Climate Actions being developed in an ERASMUS+ project that ECOLISE members are currently engaged in.