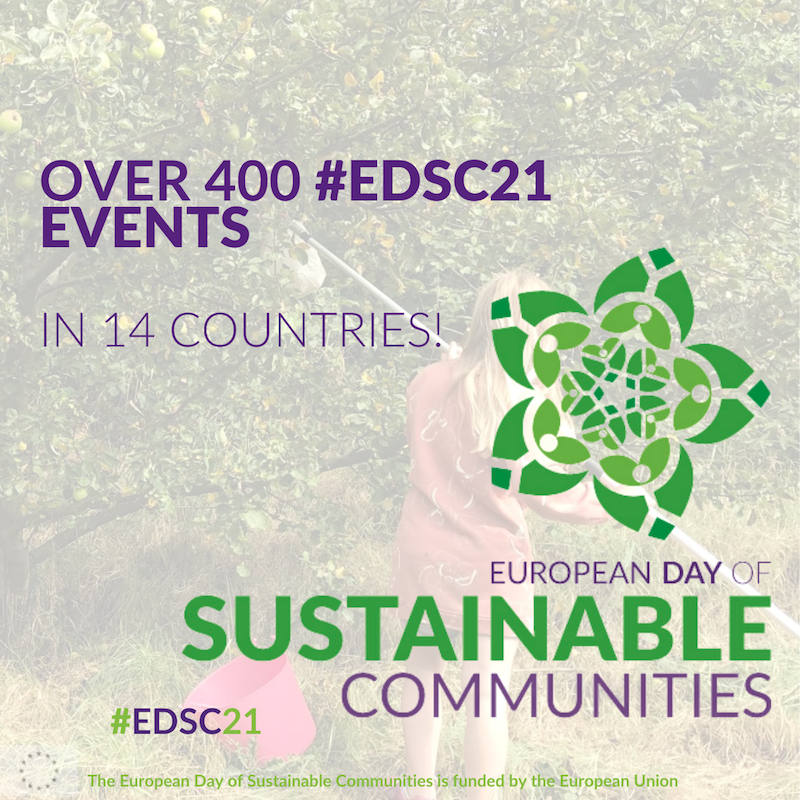 Hundreds of communities in 14 countries celebrated the 5th European Day of Sustainable Communities (EDSC) on 18th September 2021. Some 400 events were registered on this website as part of the Day.

These locally organised events represent the irrepressible imagination and creativity of people taking action in their local communities for a healthier, fairer, regenerative world. Examples include:

“These citizen-led initiatives are at the forefront of a fast expanding movement of communities that are responding in creative and imaginative ways to the climate and ecological emergency. The pandemic has also had an unexpected impact, as local communities rediscovered a sense of empowerment in the face of global challenges,” said Eamon O’Hara, Executive Director of ECOLISE, the main organiser of the day. “The active participation of citizens and communities is essential if we are to avoid climate catastrophe, and also to ensure we achieve a socially just and fair transition. The EDSC provides a platform to showcase the work of communities across Europe, now also recognised by the launch of the European Climate Pact.”

The EDSC also recognises that local action in Europe is an act of solidarity with those who are most severely affected by climate change, the women and girls of the Global South. They are the most vulnerable because of social inequities – gendered social roles, discrimination, cultural practices and laws, and because of poverty – women and girls make up 70% of the world’s one billion poorest people.

Since it began in 2017, the EDSC has highlighted the work of thousands of communities in 27 countries across Europe.

EDSC21 is part of Communities for Future, a broader initiative launched by ECOLISE in 2020 that aims to inspire and empower local communities across Europe to respond to the climate and ecological emergency. It is grounded in research which shows that community-led initiatives are highly effective in reducing ecological footprints, building social capital and reviving local economies.

To coincide with EDSC21 the Communities for Future Policy week brought together policy makers and the grassroots to continue to explore the theme: ‘Transformation through localisation of policy and decision-making.’ See a report of the week here.

EDSC is supported by 9 EDSC National Contact Points as well as partners Let’s Do It World, La Fetes des Possibles and Rurener.