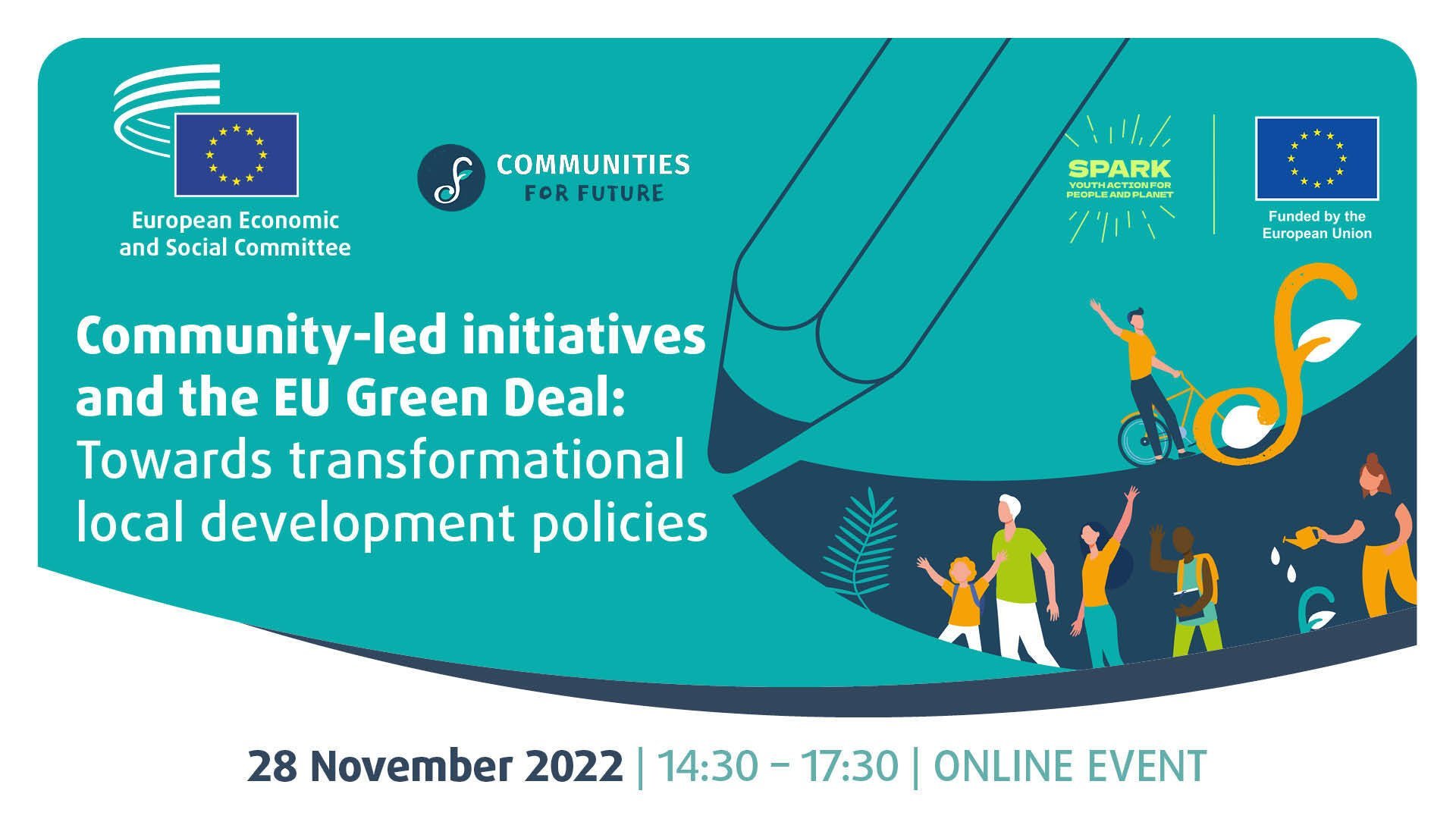 On 28 November 2022, the European Economic and Social Committee (EESC), in collaboration with ECOLISE will host ECOLISE’s main policy stakeholder event, Community-led initiatives and the European Green Deal: towards transformational local development policies, to hold conversations about the role of communities and EU policies on the path to transformational systemic change.

This event will trigger conversations about 10 theses on what truly transformational local development policies could look like, and how community-led environmental and climate actions can be strengthened through the European Green Deal, with a focus on different initiatives such as the Rural Pact and European Climate Pact as well as existing methods and frameworks such as LEADER/ Community-led local development (CLLD).

We will present the results of a policy consultation process facilitated by the ECOLISE network together with its core partners, which started with a kick-off session on 28 September and will be the starting point of a wider advocacy campaign in 2023.

The objective of the event is to:

–       Present the outcomes of the policy positioning process of community-led initiatives towards the European Green Deal;

–   Empower the role of local communities and policies for transformational systemic change;

–   Facilitate conversations to better understand the potential and needs of community-led initiatives as change agents.

Community-led initiative’s reinforcing and inspirational role in our collective response to the climate and ecological crisis are featured in Communities for Future, an integrated Europe-wide program launched in 2020 together with the European Economic and Social Committee (EESC), RIPESS, and RURENER, and in the presence and endorsement of EU Commissioners, MEPs, and ECOLISE members. Communities for Future shows how local communities and networks across Europe showcase can provide concrete steps and solutions towards transformative change including energy communities, community-supported agriculture, and locally-led climate change mitigation and adaptation.

As the European Green Deal remains the key policy tool for the transition to a well-being economy within the planet’s limits, it is high time to initiate a convergence of communities to policymakers and enable much-needed collective action from the community.

14:30 | Welcome and introduction by ECOLISE and EESC

14:40 | How to activate the potential of social change and community-led local ecological action within the European Green Deal

The political view from the perspective of the European Green Deal

15:30 | Discussion round with policy actors on the local implementation of the European Green Deal and the role of community-led initiatives

Discussion of the grouped theses in each break-out room:

– SOCIETY: Citizen-led social innovations as catalysts for mitigating and adapting to the planetary crisis

– POLITICS: Participative democracy and multi-level governance as vehicle towards transformative policies and funds

– ECONOMY: Moving towards a just economic system providing well-being for all

17:00 | Recommendations from the break-out rooms on the role of community-led initiatives and EU policies towards transformative systemic change