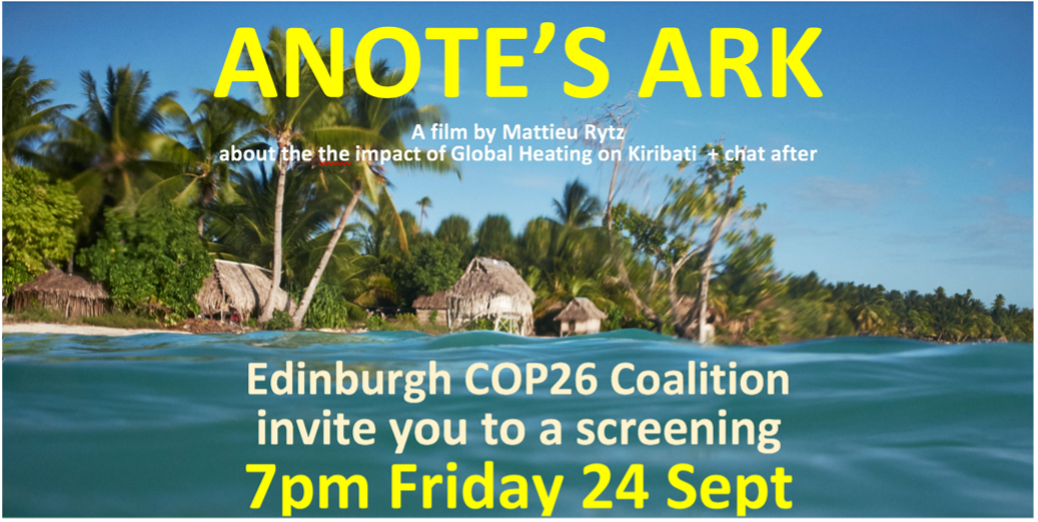 Screening of Anote’s Ark – a personal story of a plea to the UN conference in Paris about the devastating impact of Climate Change on a Pacific island. A Take One Action Local hosted by Edinburgh COP26 Coalition and Transition Edinburgh.

The Pacific Island nation of Kiribati (population: 100,000) is one of the most remote places on the planet, far-removed from the pressures of modern life. Yet it is one of the first countries facing the dilemma of our time: inundation from sea-level rise.

While Kiribati’s President Anote Tong races to find a way to protect his nation’s people and maintain their dignity, many Kiribati are seeking safety in New Zealand.

Against the backdrop of global climate negotiations, Anote’s struggle to save his nation is intertwined with the fate of Tiemeri, a mother of six, who fights to move her family to New Zealand. At stake is the survival of Tiemeri’s family, the Kiribati people, and 4,000 years of Kiribati culture.

A Canadian documentary (77 mins) – to be followed by an informal discussion and introduction to what is coming up locally in Edinburgh which people can get involved with. All welcome.

The Edinburgh COP26 Coalition brings together Friends of the Earth, Scot E.3, Transition Edinburgh, Our Future Edinburgh, Trades Unionists and many more concerned to alert Edinburgh to the challenge of achieving real progress at the UN Climate Conference due to take place 1-12 November in Glasgow.