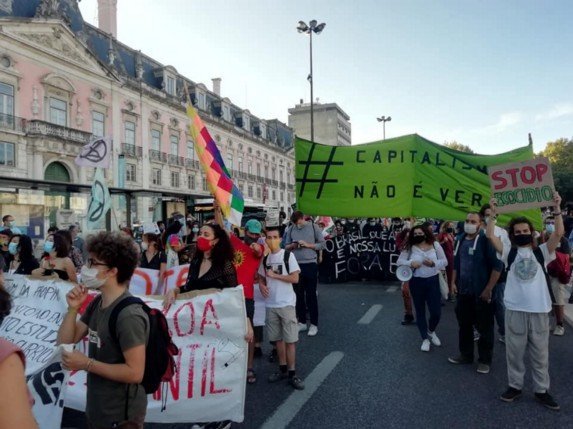 (Part 1 of 2 articles, from Lisbon’s involvement with the lead up and launch of Communities for Future. Originally published on Medium, on September 26th 2020. Original includes embedded videos and more images)

Yesterday saw the return of major Climate Strikes around the world, led by the global Fridays for Future student movement, inspired by Greta Thunberg.

Yesterdays march in Lisbon was just 1 of over 3000 happening around the world, while numbers were down on previous #ClimateStrike events in Lisbon, for many it was the first time to reconnect physically after the last half year of COVID. Everybody was masked, the group of perhaps 1000 marched from Marcus Pombal to Praça do Rossio.

The event gave us the opportunity to meet Alex from Greve Climática Estudantil (FFF PT), after a long time. We discussed how Lisbon and Portuguese climate networks and movements can best be supported by Communities for Future (CFF), the new open action platform and resource toolkit developed over the last year by ECOLISE, the European meta network of community solutions to #ClimateBreakdown and #ClimateEmergency including Transition Network, Permaculture Association, Global Ecovillage Network, ICLEI (Local Governments for Sustainability) and many many more, as well as with academic support from Faculdade de Ciências da Universidade de Lisboa (FCUL, Lisbon) and DRIFT (Rotterdam). #CfF launches on September 29th after a week of regional activities to enable local groups speak with their European politicians about the pathway we need to go down. The Portuguese event happens on Monday 28th* and is being facilitated by the HabitaRegen team, who are creating an ecovillage 60 north of Lisbon.

For our small contribution we, as ever, marched with the wiphala flag of the indigenous peoples of the Andes in Latin America, who we see as the true leaders of the global climate movement. Also happy to supprt La Vía Campesina, who support and incorporate the MST (Movimento dos Trabalhadores Sem Terra) in Brazil. Also nearer to home, the feminist ecological revolution in Rojava, as led by Make Rojava Green Again and the Internationalist Commune of Rojava. We also marched with the Stop Ecocide International banner. More photos on twitter.

While the science tells us we are already deep into climate breakdown, we are confident that the human family is waking up to the level of the threat and we are confident that we can enable the required change. This change is built by community responses, which means that while we must take to the streets to protest what is wrong, we must continue to constantly change our own worlds, our own backyards and local communities, from the bottom up. Further strengthening the international network of solidarity is key, this comes from listening to each others stories and building shared visions and strategies on how to change everything, to create the #RegenerativeCultures that we know are more beautiful and wholesome than the reality of today. Our solutions must be for everyone, as opposed “eco ghettos” for the rich 1%.. Its a global challenge and participation in this journey leads to the greatest of adventures.

Deep thanks to all who are doing what they can, where they can, with whatever they can.. It all matters. We will get there..