Why communities need to engage in politics in general, and the European Green Deal in particular

Community-led initiatives are already active in environmental action on the ground – and have been for decades. Very often this action was done in niches, outside of the mainstream, and in spite of the larger political frameworks which have until recently supported neoliberal economic approaches, prioritizing economic profits over planetary wellbeing. This is also true for EU policies, which were a leading factor in supporting globalization and mainstreaming neoliberalism overall. One example: The majority of the EU’s budget is traditionally spent in the agricultural sector until now incentivizing economic growth and industrialised agriculture. This has led to the disappearance of small farms, massive biodiversity loss, pollution, impoverished rural communities with fragile social structures, a lack of infrastructure, etc. The LEADER approach was originally introduced in the 90s in order to counterbalance the negative impacts of policies such as the Common Agricultural Policy (CAP) on rural communities.

In autumn 2019, the protests on Fridays for Future, and the outcome of the European Parliament elections, together with the louder and louder warning cries of the scientific communities (in the lead: IPCC and IPBES as relatively new science-policy interfaces installed by the UN) and the experience of heat waves in Europe triggered the EU to change direction. The European Green Deal (EGD) was put forward as a united political European answer to the planetary crisis, and as Europe’s contribution to international treaties such as the Paris Agreement  (an attempt to limit temperature increases to below 2 degrees Celsius) and the Convention on Biological Diversity. The aim of the Green Deal is to reach climate neutrality and restore healthy ecosystems by 2050. The policy package is huge, and it addresses almost all areas of our lives – from industry to agriculture to housing to mobility to biodiversity. It is based on scientific findings by the European Joint Research Centre and other science-policy interfaces, and it has a systemic approach, aiming to infuse all policies with the overall priority of environmental sustainability. It is clear to the European Commission that the Green Deal needs citizen support to become a reality, which is why the European Climate Pact was launched, reaching out to citizens and communities. In itself, the EGD is a paradigm shift. The EU is creating a force to act for national member states, especially with binding laws such as the European Climate Law (55% reduction of emissions by 2030, climate neutrality by 2050) and the European Nature Restoration Law (30% of land in the EU protected and restored by 2030, all of the land restored and 50% protected by 2050). The Green Deal shies away from openly calling out the root cause of the planetary crisis, though, which is an extractive economic system based on economic growth, and the EU has digitalisation as its other “twin” priority, which holds the potential to contradict with environmental goals expressed in the EGD. Right now, the Green Deal is under attack by strong lobbies, and there is a real risk that the European elections in 2024 will see a rise in populism and a weakening or even scrapping of the Green Deal. The Russian war against Ukraine has united EU member states in their support for the Green Deal, but strong lobbies call for weakening green regulation, attacking the Green Deal for example when it comes to the proposed “Farm to Fork” policy package which would have the potential to change overall agricultural policies within the EU. 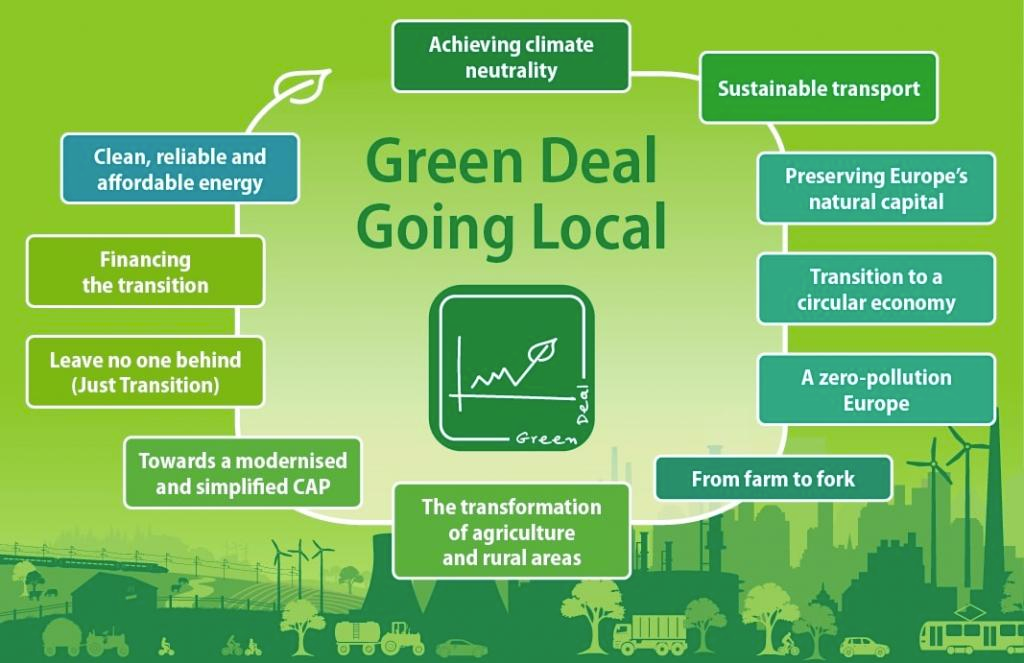 At around the same time as the European Green Deal  saw the light of the day in autumn 2019, ECOLISE started to organise community-led initiatives around permaculture, transition network and ecovillage movements, which until now had acted outside of the EU’s Brussels bubble, often quite deliberately shying away from EU policies as their impact on communities was deemed damaging. The decision to organise a Brussels based association with the goal of influencing EU politics was thus an opening towards mainstream society. Distrust in policy, and especially in the EU, remains until now, yet the systemic approach which is built into most communities also means that it is clear to many that grassroots initiatives need an adequate systemic framework, and that the planetary crisis is so advanced that a localised community-life separate from the system at large (“dropping out”, which was thought to be possible in the 60s and maybe still in the 70s) is no longer an option: Communities need to turn to the regime-level and help to make it the political framework fit for transformational change, in order for community-led initiatives (CLIs) to thrive. This is why “Communities for Future”– ECOLISE’s action network aiming to mainstream community-led initiatives – was launched in 2020. 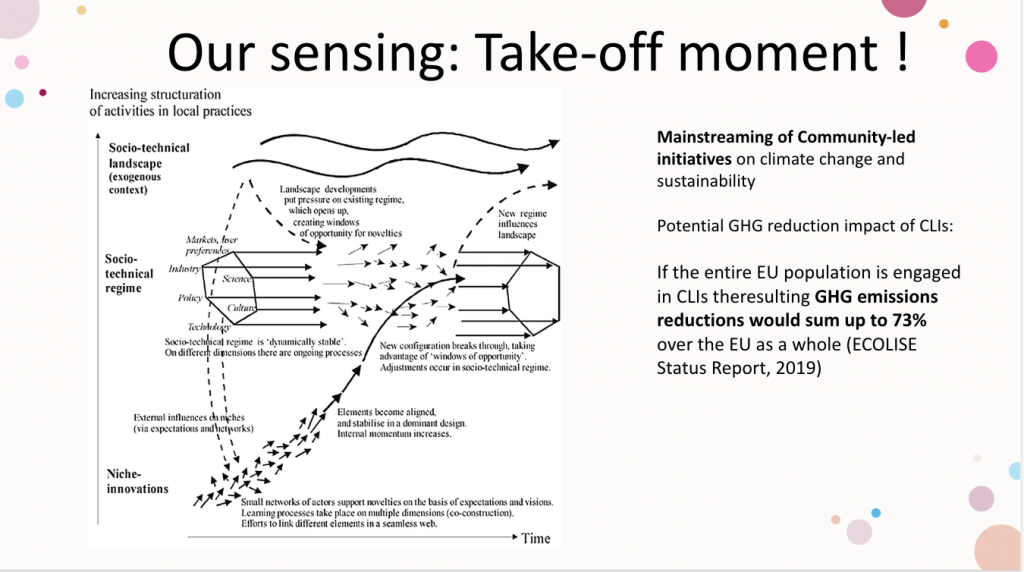 Today, ECOLISE has built a solid base of knowledge and policy positioning overall. It has made the entry onto the Brussels stage, and its offer – mainstreaming concrete and practical answers to the planetary crisis, triggering social and behaviour change on a wider scale, giving inspiration for a good life within planetary boundaries – is appreciated by both policy and science and a stable network of partners such as the Climate Action Network Europe or the European Economic and Social Committee.

Now, the next step is to articulate the concrete demands that communities have towards the EU, in order to thrive in an adequate political framework. These demands are first and foremost about transformative regional and local development policies, as this is where communities live, where the impacts of the planetary crisis are felt, where concrete actions are taken. Localisation is also overall a big part of the answer to the planetary crisis, with reduced transports, local instead of global value chains and a good life due to a strong social fabric and healthy ecosystems. Localisation is also what the state of the planet forces us to do – which is reflected in the instability of global value chains due to the war against Ukraine, but also due to the pandemic and environmental impacts.

To explore and define concrete demands of communities towards policies on a EU scale, ECOLISE is starting a policy positioning process together with core partners, which aims to position communities towards the European Green Deal and support its systemic qualities, whilst also defining the framework conditions for transformational change at local levels. The aim for 2022 is to engage communities into a conversation with what the EU Commission has put forward (the European Green Deal), but also to unite existing policy positions by ECOLISE and core partners, creating a baseline from which to work together, to find strong partners and speak with a united voice.

The Community-led local development approach, which has been put forward by the EU in the 90s in order to complement the LEADER approach and open it up for all kinds of projects and stakeholders, is a natural point of reference for ECOLISE in this – grassroots initiatives and local action groups have a lot in common. This is why ECOLISE is animating a Community of Practice on the LEADER/ Community-led local development approach – an EU method and framework which allows to channel EU policies and funding to local levels, and one of the very few mechanisms the EU has to influence policies on local levels. It works bottom-up, multi-sectoral and focusses on partnerships between public authorities, private businesses, and civil society. The LEADER/ CLLD approach is a promising piece in the puzzle of how to localise the Green Deal, how to strengthen environmental action locally, and how to make transformational regional and local development policies a reality on the ground. ELARD (which groups > 2,000 local action groups) could be a natural ally for a truly systemic understanding of sustainable development, with its strong grassroots-approach, together with other stakeholders active in territorial development. Other partners such as the Climate Action Network Europe (CAN-E) or RIPESS and Rurener are equally important when it comes to finding a strong voice for community-led initiatives in the field of holistic sustainability action – and we’re sure there are more coalitions to be built.

ECOLISE is starting this policy positioning process right now, asking: “The European Green Deal: What’s in it for community-led initiatives?” and you’re invited to take part in the consultation process! Have a look here if you’re interested.